A short introduction to 360° video

360° video technology offers the possibility to capture the complete surroundings of a given environment, by utilizing two or more wide angle lenses and combining these images afterwards.

The resulting video can then be viewed in an interactive way by looking or dragging around in all directions, by zooming in to particular parts of the video and by a variety of other techniques depending on the software used. In order to get an idea of the actual result we’ve included a simple 360° video demonstration showing one of our project partners walking around in a 360° video.

The embedded video shows the Auditorium Maximum (Audi-Max) of the WU Vienna, recorded from the perspective of a student’s point of view. Try using your mouse pointer to drag and drop inside the video in order to change your viewing angle and look around. If you are using a mobile device you should be able to use the orientation and movement of your smartphone to change your viewing direction. 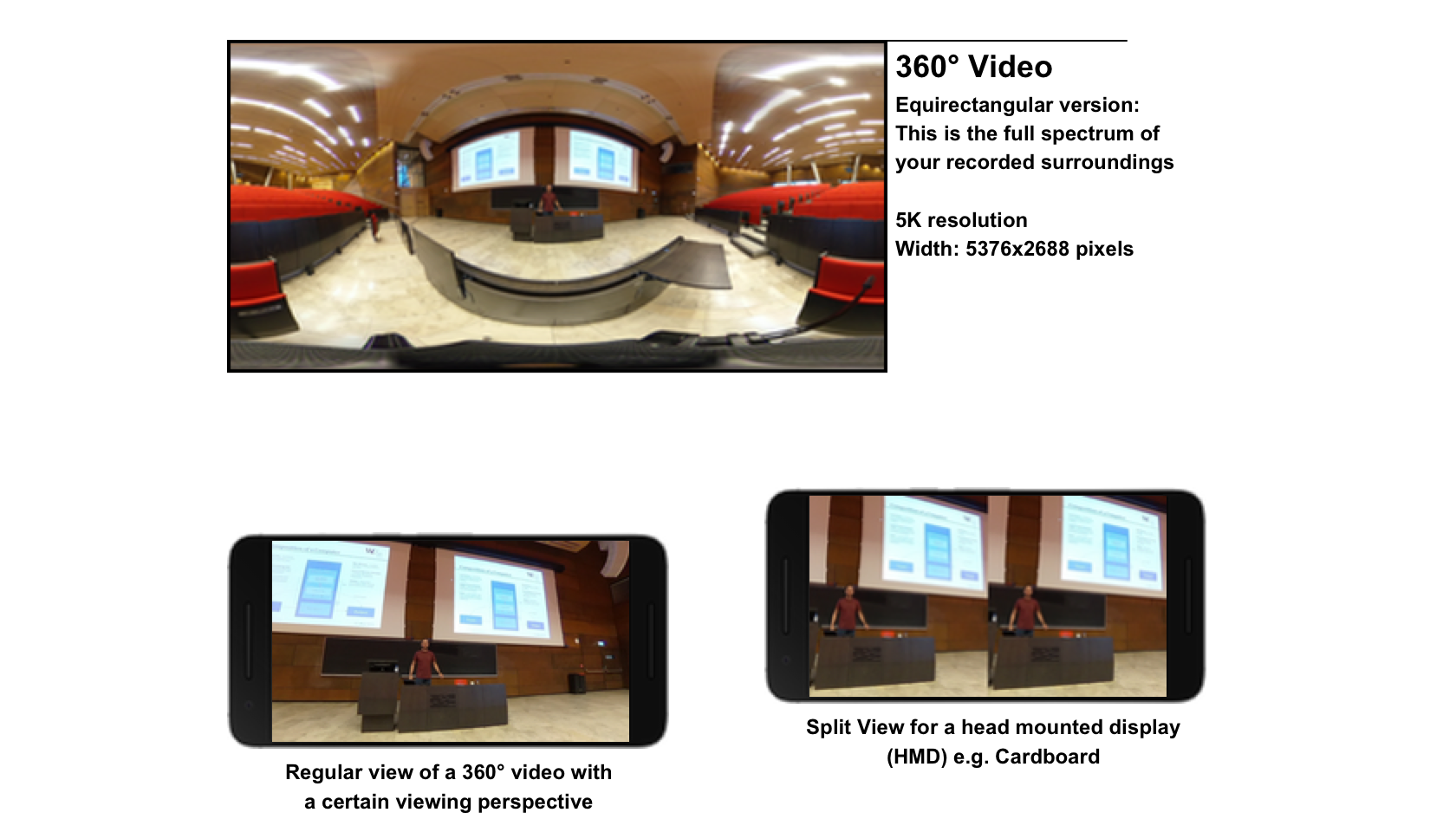 In order to produce a 360° video you need a 360° camera. The market is constantly evolving and new cameras are entering the market in a fast manner. In order to keep up with this fast development and still be able to decide which camera is best for you let us first look at a very unique characteristic of most 360° cameras – its dual camera lens setup.

Figure 2 shows three different 360° cameras from the side: (1) Ricoh Theta V (2) GoPro Max (3) Insta360 One X. You can see their special feature of having two lenses, which ultimately create the video. 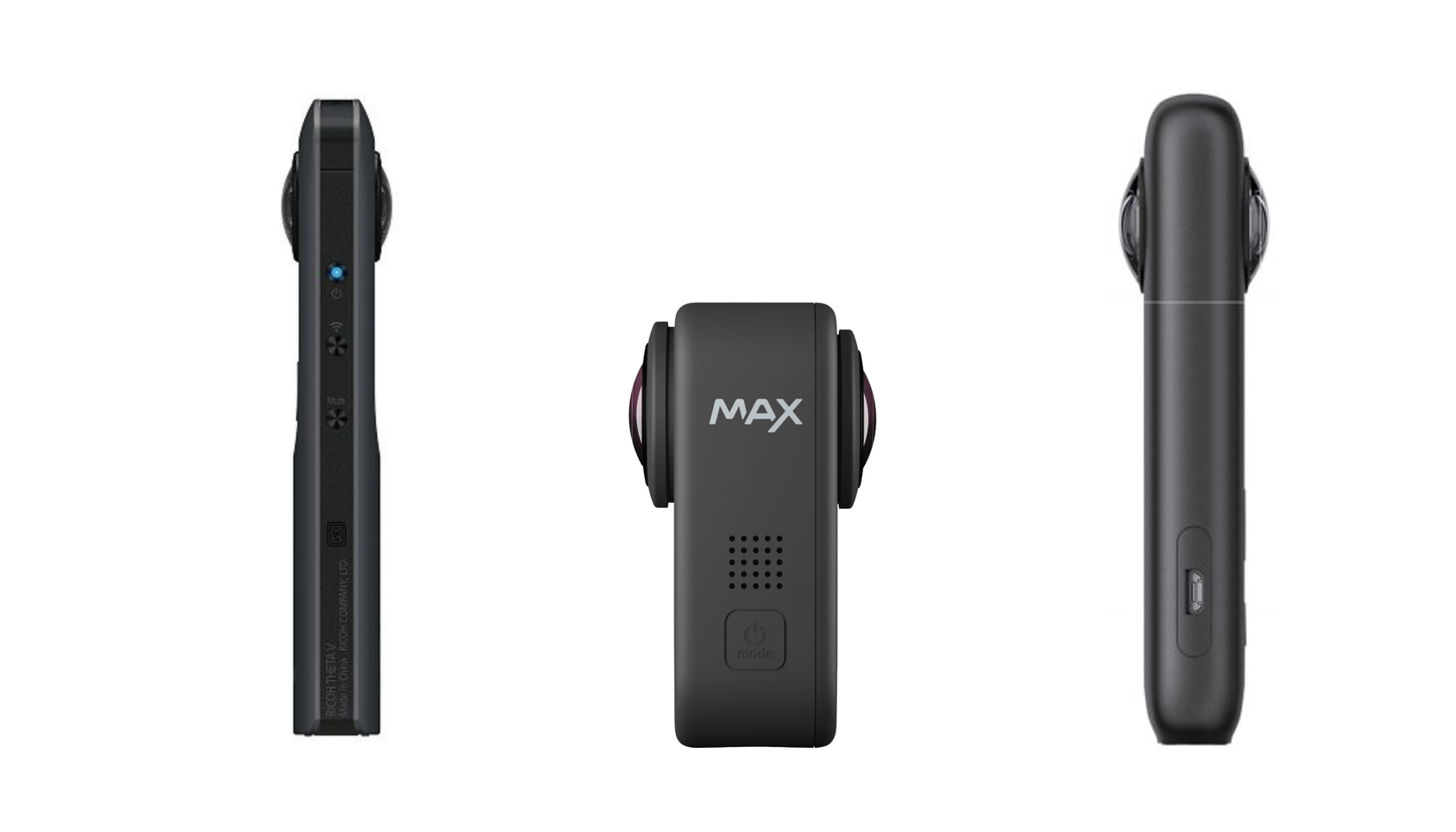 Initially a standard dual lens 360° camera will record two video signals from both camera lenses. This creates a video as the result of a simple recording with two “fish-eye” like video recordings side-by-side in one video file. You can see a result below:

This video is the raw result out of a 360° camera – it is not ready yet – it needs to be stitched in order to create a so called equirectangular version of it. Stitching is the process of combining the separate dual lens video recordings into one video. You can see the resulting stitched version without a 360° projection in the image below.

Features to look out for in a 360° video camera

The following section will explain to you, why it is important to look out for: Resolution, Storage, Battery, Maximum Time of Recording and Additional Capabilities

In order to get an overview of different models available and compare them, we need to focus on relevant features specific to 360° cameras. Specific scenarios often require certain technical requirements, which should help you decide which camera may be suitable for your need.

When looking at the specifications of 360° cameras, one can often see references to FullHD, 4K, 5K or even more. Obviously, one should look out for this specification if you are aiming for high image quality. However, in this case even 4K may be not enough depending on your video scene. If you’re interested in the technical details, you can learn more about why 4K is sometimes not enough for high quality 360° video: Explaining 360 video resolution: how to measure it, quality comparisons, and other metrics to look at (27. May 2020).

Resolution of a 360° video is different from regular video, as the amount of pixels need to be spread around the viewer. This leads to differences in perceived video quality, when viewing 360° video on a flat screen in 2D versus viewing it on a HMD. The reason for this is the field of view a VR headset offers. The field of view describes the angle of space viewable from a given lens position. With a 4K video the resulting viewing resolution with a VR headset may be reduced to only 1K. If you’d like to learn more about the field of view: Field of view face-off: Rift vs Vive vs Gear VR vs PSVR

“360° video files can become large videos and take up storage space quickly, thus having an exchangeable storage option may prove useful when doing a lot of recordings in one go”

In terms of storage one can differentiate between 360° cameras with expandable storage (such as SD cards) and 360° cameras with internal storage (such as flash memory). Cameras with an internal storage option, such as the Ricoh Theta V or Ricoh Theta Z1, have the benefit of providing everything in one package. You, as a user, simply record your video and don’t need to think about which SD card fits or if you have enough SD cards at hand. This can come in handy if you decide to use your 360° camera on sporadic occasions with not too many recordings happening in one go. For cameras with an internal storage, keep in mind that you will need to budget time to transfer your video data from the camera to your PC.

On the other hand, there are 360° cameras offering expandable storage through SD cards. Cameras, such as the Insta360 One R or GoPro Max, have an option to expand their storage by using a SD card. Normally it is recommended to use a high performance high speed class SD card such as an UHS-I V30 speed class or UHS-II Class 10. The Insta360 One X as well as the GoPro Max, both have limitations on using SD cards with a maximum storage space of 256GB. With new cameras such as the Insta360 One R these limitations move upwards to 1TB. The advantage of using SD cards is their fast exchangeability. This comes in handy if you have recording situations with numerous successive recordings, such as Teacher Training Seminars. In such cases you can easily switch SD cards in between your recordings.

As a reference, Table 1 shows the size difference between a FullHD and a 4K 360° video recording from a Ricoh Theta V.

“Recording and using the camera in combination with a paired smartphone can drain the battery very fast. Exchangeable and rechargeable battery packs could resolve this issue”

Battery life is crucial when filming in a mobile setting. Running out of battery in the middle of an ongoing recording can be very frustrating. Again, with 360° cameras there are two options: (a) internal battery and (b) exchangeable battery. If you prefer hassle-free charging through a USB cable, without the need to think about packing enough batteries, then a 360° camera using an internal battery is more than enough. This is optimal for scenarios where you will have short recordings and not too much time spent on actually using the camera. It could be of interest for short tours or single recordings.

360° cameras with changeable batteries are best for settings with long recordings or long streaks of planning without any power source. In such cases it is worth noting to look out for external battery charging stations. Both the Insta360 family of products and the GoPro Max offer charging stations and spare batteries.

“Be sure to think about how long you plan to record a certain scene. Due to technical limitations 360° cameras may have limitations concerning the length of a recording”

In order to maintain file size compatibility some camera vendors have applied recording time limitations. The reason behind this is mainly due to the fact that 360° videos can become very large. Depending on the file system you are using there are certain limitations. A file system formatted in FAT32 will have a maximum file size limit of 4GB. This, however, can be alleviated by using an SD Card formatted in FAT64 (exFAT or FAT64); the file size limitation is 16EB (Exabyte). The Insta360 One X will allow you to record continuously, however it will save the resulting files in segments of 30 – 90 minutes depending on your setting (see detailed table here). The Ricoh Theta V also applies a recording length limitation of 5 – 25 minutes (one can change between these settings via the smartphone app).

Looking at the general capabilities of 360° cameras, there are different elements, which may be of importance to your choice. We picked out three central capabilities, which let you differentiate even more between the models available on the market: 360° photos, Image Stabilization, and Audio Connectivity.

360° photo:
Apart from recording video scenes, it does make sense to capture still images of moments in more detail. In such cases all cameras offer high quality 360° photographs. It is worth pointing out that the resolution often is even higher than the video recordings themselves. Ricoh Theta Z1, for example, will shoot 360° photos with a still image resolution of 6720 x 3360 pixels (7K) and is equipped with a 1.0-inch back illuminated CMOS image sensor. Currently (Jun 2020), this is the highest resolution in combination with a 1.0-inch back illuminated CMOS image sensor, which offers superior noise reduction performance even when shooting at night or indoors with low light.

Image Stabilization:
When recording mobile scenarios it may be necessary to use the 360° camera in a moving situation without the tripod actually standing still on the ground. All cameras can be mounted to a regular tripod camera mounting. Note however, that for the Insta360 ONE R and the GoPro Max, one requires special mounting brackets in order for them to be mounted on a standard camera tripod.

Audio Connectivity:
When shooting a video, especially with regards to a 360° video, sound may be of central importance. It could be that you would want to emphasize the spatial component by making sure that a sound is to be heard “in the back” or “from the side”. In such cases you would want to utilize a 360° capable microphone. Bear in mind though, that most 360° cameras have multiple microphones embedded pointing into different directions in order to achieve a minimum of spatial sound recording. Therefore, in most cases you will be able to create sufficient spatial sound recording with the default camera microphone.

However, in case you would want to connect an external microphone, there are differences with each 360° camera. The Ricoh Theta V supports a standard 3.5 mm audio jack input. You can connect any standard microphone or use the Ricoh 3D Microphone TA-1. 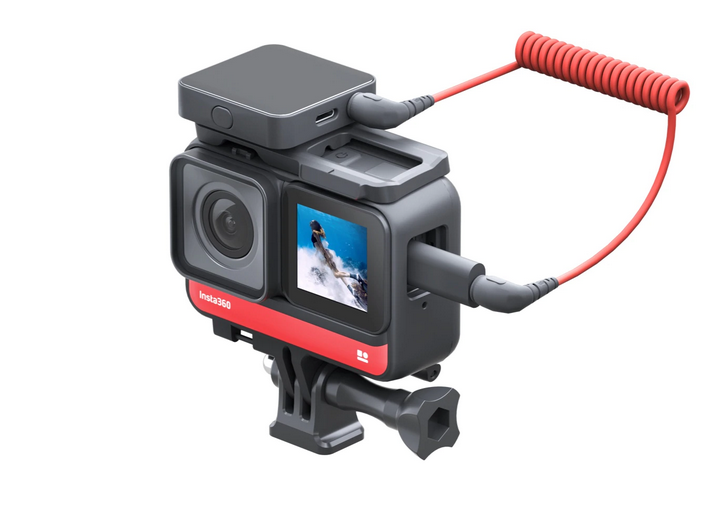 This is was a short overview of features to look out for in a 360° camera. Based on this, you should be able to decide which camera fits best for your needs in terms of creating educational 360° video content. There are more advanced features such as Live Streaming or Plugins for additional features in cameras. For starters, it is recommended to get acquainted with the camera by using it in the field. This way you will also get a feel for its pro’s and con’s in terms of usability and effectiveness for your recording situation.